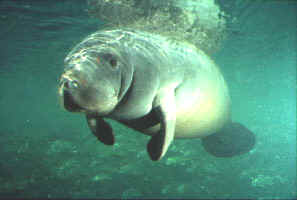 The Florida Manatee, a subspecies of the West Indian Manatee, is a native of the coastal waters of the State of Florida. These docile air breathing marine mammals average 10 feet in length and weigh approximately 1,200 pounds. Once plentiful, the state manatee population has dwindled due to hunting, habitat alteration, and other natural and man-caused influences. Today, there only approximately 2,500 manatees living in Florida waters.

Manatees are herbivores which feed upon a wide variety of submerged and emergent vegetation. Preferred food is seagrass, mangrove leaves, algae, water hyacinth, and hydrilla. They spend 6-8 hours per day eating.

Manatees can be found in both fresh and saline (salt) waters. They generally inhabit shallow, slow-moving rivers, bays, canals, estuaries and other coastal waters.

Slow swimmers, manatees are particularly susceptible to injuries due to collisions with motor boats. As a consequence, many waterways have been designated as idle speed, slow speed, or exclusionary zones to reduce the potentially harmful interaction between boaters and manatees.

Manatees are protected by the Federal Marine Mammal Protection Act of 1972 and the Endangered Species Act of 1973. As a consequence, before the Florida Department of Environmental Protection will permit construction in state waters, consideration will be given to the potential impact to manatee habitat and the likelihood of injuries from motor boats.

Loggerhead Turtles are listed as a “Threatened” species under the Endangered Species Act of 1976. They can be found in Florida’s shallow, coastal waters, bays, lagoons, and estuaries.

Adult Loggerheads average a little over 3 feet in length and weigh 200-350 pounds. They feed primarily upon bottom dwelling mollusks, crabs and encrusting animals attached to reefs and rocks.

In general, Loggerheads do not come out onto land, except females during nesting. Each year from late April to September, female Loggerheads emerge from the water, dig a pit in the sand using her hind flippers, and deposit 100 to 125 eggs the size of ping pong balls. Adult female Loggerheads return annually to the beach where they were born.

After about 53 to 55 days, under the cover of darkness, 2 inch long Loggerhead hatchlings dig themselves out from their nest and crawl down the beach to the water. Florida beaches account for one-third of the world’s population of Loggerheads.

Loggerhead survival requires that hatchlings find the water as quickly as possible before becoming prey for a variety of predators. It has been discovered that Loggerhead hatchlings may become disoriented by artificial lighting and crawl toward the light source, instead of towards the sea. Such disorientation increases turtle mortality.

To enhance the survival of the species, the Florida Department of Environmental Protection requires applicants for Coastal Construction Control Line Permits to submit a lighting plan demonstrating the minimization of potentially adverse impacts from artificial lighting. The DEP will also require glass windows to be tinted such that interior residential lighting will not be visible from the beach. Additionally, construction activities on the beach will be prohibited during sea turtle nesting season.

Loggerhead Sea Turtles and their Habitat

The production of the next generation of loggerhead sea turtles results from a synergism of the effects of the ecological conditions in the foraging area on the energetics of the female and of the beach environmental conditions on development of the embryos. To be successful, reproduction must occur when environmental conditions support adult activity (e.g., sufficient quality and quantity of food in the foraging area, suitable beach structure for digging, nearby inter-nesting habitat) (Georges et al. 1993, p. 2). The environmental conditions of the nesting beach must favor embryonic development and survival (i.e., modest temperature fluctuation, low salinity, high humidity, well drained, well aerated) (Mortimer 1982, p. 49; Mortimer 1990, pp. 809, 811). Additionally, the hatchlings must emerge to onshore and offshore conditions that enhance their chances of survival (e.g., less than 100 percent depredation, appropriate offshore currents for dispersal) (Georges et al. 1993, p. 2).

Terrestrial nesting habitat is the supralittoral zone (area above the spring high tide line) of the beach where oviposition (egg laying), embryonic development, and hatching occur. Loggerheads nest on ocean beaches and occasionally on estuarine shorelines with suitable sand. For a beach to serve as nesting habitat, a nesting turtle must be able to access it. However, anthropogenic structures (e.g., groins, jetties, breakwaters), as well as natural features (e.g., offshore sand bars), can act as barriers or deterrents to adult females attempting to access a beach (Witherington et al. 2006, entire). Adult females approaching the nesting beach may encounter these structures and either crawl around them, abort nesting for that night, or move to another section of beach to nest. Nests are typically laid between the high tide line and the dune front (Routa 1968, p. 293; Witherington 1986, pp. 16, 27; Hailman and Elowson 1992, p. 5).

Nest sites typically have steeper slopes than other sites on the beach, and steeper slopes usually indicate an area of the beach with a higher elevation (Wood and Bjorndal 2000, p. 126). Wood and Bjorndal (2000, p. 126) speculated that a higher slope could be a signal to turtles that they have reached an elevation where there is an increased probability of hatching success of nests. This is related to the nests being laid high enough on the beach to be less susceptible to repeated and prolonged tidal inundation and erosion. Nests laid at lower beach elevations are subject to a greater risk of repeated and prolonged tidal inundation and erosion, which can cause mortality of incubating egg clutches (Foley et al. 2006, pp. 38-39). Regardless, loggerheads will use a variety of different nesting substrates and beach slopes for nesting. They will also scatter their nests over the beach, likely to ensure that at least some nest sites will be successful as “placement of nests close to the sea increases the likelihood of inundation and egg loss to erosion whereas placement of nests farther inland increases the likelihood of desiccation, hatchling misorientation, and predation on nesting females, eggs, and hatchlings” (Wood and Bjorndal 2000).

Loggerhead sea turtles spread their reproductive effort both temporally and spatially. Spatial clumping occurs because loggerheads concentrate their nesting to a few primary locations that are augmented by lower density, satellite sites. In addition, a few isolated, low-density sites are known (Miller et al. 2003, p. 126). Loggerheads show a high degree of nesting site fidelity (Miller et al. 2003, p. 127). Once an adult female has returned to the region where it hatched and selected a nesting beach, she will tend to re-nest in relatively close proximity (0-5 km (0-3 mi)) during successive nesting attempts within the same and subsequent nesting seasons, although a small percentage of turtles will utilize more distant nesting sites in the general area (Addison 1996, p. 76; Miller et al. 2003, pp. 127-128). On a regional level, in the southeastern U.S., nesting density can also be influenced by the distance to the Gulf Stream System (Putman et al. 2010, p. 4). Thus, a high-density nesting beach is the product of the distance from the Gulf Stream, site fidelity and nesting success. A spatiotemporal analysis of the Florida Index Nesting Beaches concluded that fine scale high and low density nesting zones were consistent over the 17-year time series. This suggests that nesting density distribution is a product of both nest site fidelity and specific beach attributes (Witherington et al. 2009, entire). A high-density nesting beach produces a large number of hatchlings that are recruited to the population resulting in a relatively higher number of females that will return to nest on those same beaches.

Sea turtles must have “deep, clean, relatively loose sand above the high-tide level” for successful nest construction (Hendrickson 1982, p. 54). Sand is classified as material predominately composed of carbonate, quartz, or similar material with a particle size distribution ranging between 0.062 mm and 4.76 mm (0.002 in and 0.187 in) (Wentworth and ASTM classification systems). Sea turtle eggs require a high-humidity substrate that allows for sufficient gas exchange for development (Mortimer 1990, p. 811; Miller 1997, pp. 67-68; Miller et al. 2003, pp. 129-130). Ackerman (1980, p. 575) found that the rate of growth and mortality of sea turtle embryos is related to respiratory gas exchange with embryonic growth slowing and mortality increasing in environments where gas exchange is reduced below naturally occurring levels.

Loggerhead nests incubate for variable periods of time depending on sand temperatures (Mrosovsky and Yntema 1980, p. 272). The length of the incubation period (commonly measured from the time of egg deposition to hatchling emergence) is inversely related to nest temperature, such that between 26.0 °C and 32.0 °C (78.8 °F and 89.6 °F), a change of 1 °C (33.8 °F) adds or subtracts approximately 5 days (Mrosovsky 1980, p. 531). The warmer the sand surrounding the egg chamber, the faster the embryos develop (Mrosovsky and Yntema 1980, p. 272).

Hatchlings use a progression of sea-finding orientation cues to guide their movement from the nest to the marine environments (Lohmann and Lohmann 2003, entire). Hatchlings first use light cues to find the ocean. On natural beaches without artificial lighting, ambient light from the open sky creates a relatively bright horizon compared to the dark silhouette of the dune and vegetation landward of the nest. This contrast guides the hatchlings to the ocean (Daniel and Smith 1947, pp. 414-415; Limpus 1971, p. 387; Salmon et al. 1992, pp. 72-75; Witherington and Martin 1996, pp. 5-12; Witherington 1997, pp. 311-319). After reaching the surf, hatchlings swim and are swept through the surf zone, after which wave orientation occurs in the near shore area and later magnetic field orientation as they proceed further toward open water (Lohmann and Lohmann 2003, entire).

Both nesting and hatchling sea turtles are adversely affected by the presence of artificial lighting on or near the beach (Witherington and Martin 1996, pp. 2-5, 12-13). Artificial lighting deters adult female loggerheads from emerging from the ocean to nest, and loggerheads emerging onto a beach abort nesting attempts at a greater frequency in lighted areas (Witherington 1992, pp. 34-37). Because adult females rely on visual brightness cues to find their way back to the ocean after nesting, those turtles that nest on artificially lighted beaches may become disoriented by artificial lighting and have difficulty finding their way back to the ocean (Witherington 1992, p. 38). Hatchling sea turtles have a robust sea-finding behavior guided by visual cues (Mrosovsky and Carr 1967, pp. 228-230; Mrosovsky and Shettleworth 1968, pp. 214-218; Dickerson and Nelson 1989, entire; Witherington and Bjorndal 1991, pp. 146-148; Salmon et al. 1992, pp. 72-75; Witherington and Martin 1996, pp. 6-12; Lohmann et al. 1997, pp. 110-116; Lohmann and Lohmann 2003, pp. 45-47). Hatchlings unable to find the ocean, or delayed in reaching it, due to the presence of artificial beachfront lighting are likely to incur high mortality from dehydration, exhaustion, or predation (Carr and Ogren 1960, pp. 33-46; Ehrhart and Witherington 1987, pp. 97-98; Witherington and Martin 1996, pp. 12-13).

Since loggerheads nest on dynamic ocean beaches that may be significantly degraded or lost through natural processes (e.g., erosion) or human-related actions (e.g., development, armoring, lighting), the designation of currently occupied nesting beaches adjacent to the highest density nesting beaches as critical habitat will help ensure the availability of nesting habitat if the high-density nesting beaches are temporarily or permanently lost. 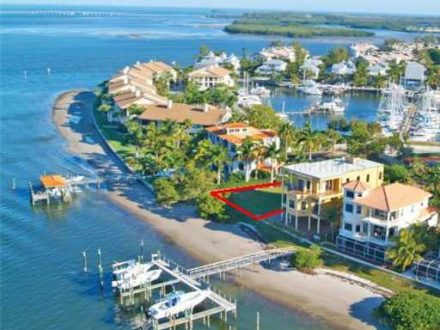 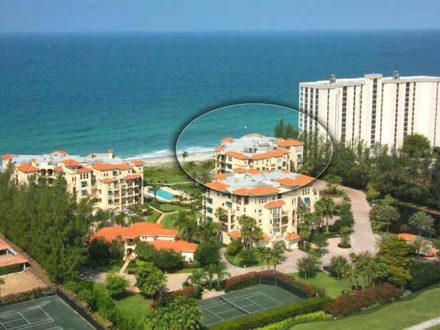 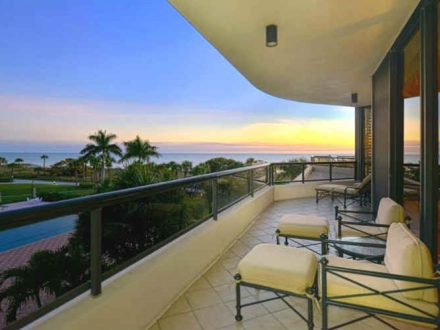 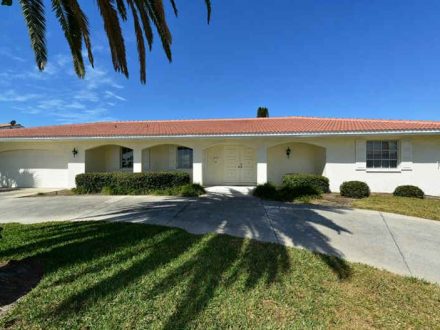 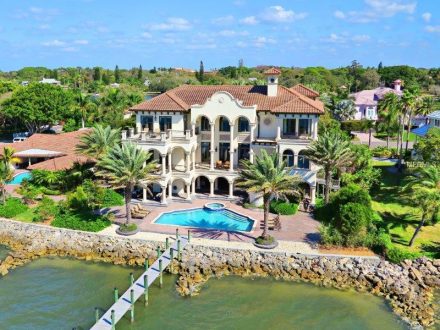